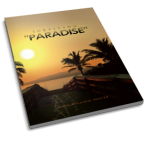 It is Wednesday, and that is Surviving “Paradise” the book day at this blog!  But first, how about some Roger Federer news!  YES!  Fed played his first match at the Shanghai Masters 1000 event and took out A. Seppi, 6 – 4, 6 – 3.  Roger looked a bit rusty in the first set, lost his serve once but broke right back and had too many unforced errors for the match.  Also, first serve percentage needs to go up as he continues in the tournament.  Overall, solid performance by King Roger, now not enjoying a #7 world ranking.  Fully expect him to qualify for the year end final in London, especially with the official announcement that Andy Murray would in fact withdraw from the event as he is recovering from minor back surgery.  Most interesting to see Rafael Nadal, Fognini, Tommy Haas, and Lopez all sitting courtside to watch Mr. Federer return to action.  Hey, when you are an icon, you are simply the bomb!  Never seen Federer take in a Nadal match.  Anyhow, Roger’s agent has said Federer’s back is fine, not 100% but good so with his traditional smaller magic wand in hand, here’s hoping Fed works some magical moments to remember on the court in Shanghai this week,  Next up for Roger, the always entertaining Gael Monfils.

In Indy news, Dario Franchitti has left Houston and gone to Indianapolis where he will need another surgery performed on his fractured right ankle.  Talked with my Indy insider yesterday, Dario is going to be OK!  Speedy recovery and well wishes to him.  Team Gnassi is switching from Honda engines to Chevy for 2014 and also adding Tony Kanaan to their team (Kanaan is the 2013 Indy 500 winner).  Gee, Dixon, Franchitti, Kanaan and Kimball, should be a great team in 2014!

ABC hit drama Nashville airs tonight at 10:00 pm EST.  I read a little snippet somewhere that new record label mogul played by Oliver Hudson will be a recurring love interest for Rayna this season…um…they certainly did not seem to be feeling any “love” towards each other in last week’s episode.  Well, you know how these things go, sparks fly and then the tide turns.  Does not sound good for any kind of Deacon and Rayna romance, however.

Finally, the event du jour…please check out my book Surviving “Paradise” by Susan Willoch Shaver.  A southern woman relocates to Sarasota, FL (“paradise”?) only to be met by a ridiculous set of people and circumstances.  Sure to bring you an entertaining read and a lot of laughter.  It is available at Amazon.com for $8.99 in paperback, $4.99 in kindle edition and also at Barnes and Noble nook for $4.99.

That’s all for today folks!

This site uses Akismet to reduce spam. Learn how your comment data is processed.